Blog » Deception: How to sneak onions into your children’s diet! Guest Blog

Deception: How to sneak onions into your children’s diet! Guest Blog

Onions. Do you know yours? My children certainly do. They can sniff them out like hunting dogs, carefully picking them out of a dish, letting out a whine of “I don’t like onions.” So when I got a jar of Mercers Red Onion Marmalade from the kind folks at The Mercers of Yorkshire, I rubbed my hands together with delight at the prospect that it was mine, all mine (and maybe a little for Mr Sloan).

We tried the onion marmalade in a sandwich, with some suitably sourced Hawes Wensleydale and sourdough bread from Farm Bistro in Harrogate. I really enjoyed the sweet and almost smokey flavour of the marmalade, which would be fantastic paired with sausages, pies or cold meats too. All was good. We had delicious adult food that the children weren’t interested in at all. At least they weren’t interested until they spotted the jar of Mercers Lemon Cheese. Gutted. I thought I’d hidden it away for me to use for baking, but my boys use their same sniffer dog noses to hunt out sweet treats. I didn’t feel bad about allowing them the lemon cheese as a sweet treat, as I have the peace of mind that all of The Mercers of Yorkshire products use only natural ingredients. And so the lemon curd was devoured on more of the sourdough toast. No sweet bakes for me. Gutted. 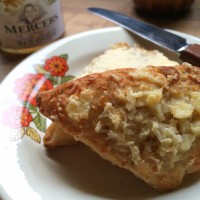 The Mercers of Yorkshire will be exhibiting at the BBC Good Food Spring Show in Harrogate, on stand Q80. We are already big fans of their English Breakfast Marmalade and Salted Caramel Sauce, but there are so many other products that they have in their range – I’ve spotted a Mercers Beer and Black Peppercorn Wholegrain Mustard that I’ll be purchasing, no doubt alongside some more of their Lemon Cheese.
RED ONION MARMALADE AND WENSLEYDALE SCONES

Sieve 175g (6oz) self raising flour into a large bowl and rub in 25g (1oz) margarine. Stir in 75g (3oz) grated Wensleydale cheese, and lightly crush in 1 tsp coriander seeds by rubbing them between the roots of your palms.

Make a well in the centre, then add 2 and a half tbsp Mercers Red Onion Marmalade. Beat 1 medium free range egg with 2 tbsp milk in a jug. Use a table knife to ‘cut’ in the marmalade, adding the egg and milk mixture gradually until a soft dough is formed (you won’t need it all).

Bring the dough together with your hands and gently shape into a round, 1.5cm in thickness. Cut into 8 triangles and space out onto the prepared tray. Brush the tops with the left over egg and milk and sprinkle with some extra Wensleydale cheese.

Bake for about 10-15 minutes until golden brown. Remove from the oven and place on a cooling rack.

We enjoyed ours with a simple spread of butter, but they would be quite delicious served with an extra cheese and onion marmalade or some cured meat.

Guest blog by Nohreen Sloan. You can read more from Nohreen on her blog www.mrssloanqueenofscones.wordpress.com and to read her ‘top tips’ to achieve successful scones!

Samples of the Mercers Red Onion Marmalade and Mercers Lemon Cheese were sent to me for reviewing purposes. All opinions on the products are my own.