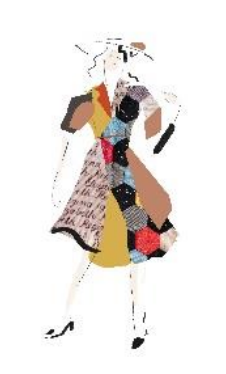 awaited Make Do And Mend exhibition…

Fashion, society and politics have always been closely interlinked, from the anarchic clothing of the punk rockers and Katharine Hamnett’s ‘slogan’ tees, to the restrictive corsets and crinolines of the Victorian era, which repressed women physically and socially. And, as the country limps ‘back to work’, the forthcoming Make Do and Mend show, presenting a visual showcase of how the Second World War both affected and effected fashion, is aptly and presciently titled for the strange times we currently find ourselves in.

The Second World War was an era when ‘Necessity Became Fashion’ or as Vogue magazine at the time coined it, ‘couture austerity’. Clothes rationing, which started in 1941, limited people to buying just one set of new clothes per year – initially allowing 60 coupons per person, which was later reduced to 48. The ration was based on how much labour went into a garment and how much material was used, so a dress could take 11 coupons, whereas a pair of stockings took only two. The new Utility scheme also forbade the use of trimmings and certain fabrics – with silk and wool not only in short supply but required for uniforms, blankets and parachutes.

In support, the Ministry of Information issued its now iconic, Make Do and Mend pamphlet, which offered housewives useful tips on how to be both frugal and stylish in times of harsh rationing, including thrifty design ideas and advice about mending, reusing and recycling old clothing.

This beautiful and evocative exhibition showcasing the style and stories of Harrogate’s fashion from the 1940s is also a timely reminder that whilst the fashion industry has gone on since those difficult and harsh times to become a global economic success story, it is now being exposed as one of the most negligent and toxic industries on the planet. Vintage clothes, clothes rental, craft, sewing and upcycling are now all widely embraced, a sure sign that today’s fashion culture – at consumer level at least – is aiming to be more sustainable and thoughtful.

There’s certainly much that we can learn from the 1940s approach to fashion and much to be inspired by, since looking smart and stylish – even during rationing – was seen as paramount to maintaining optimism and morale, a message also prevalent during our recent lockdown and new ways of home working and socialising.